Home Articles Why a Teacher to Teacher Web TV Station and why now? 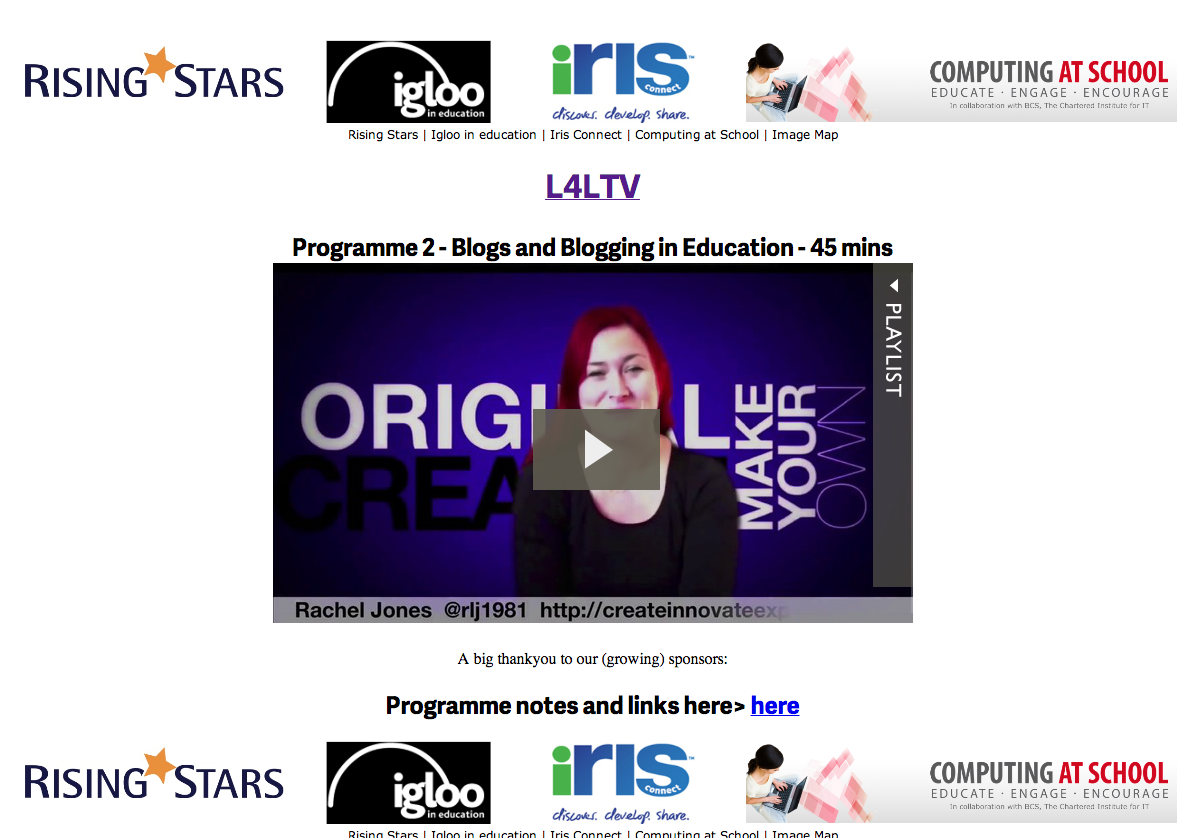 L4LTV is a project that has been in the pipeline for over 5 years now but has only recently come to fruition. It is a web based niche TV Channel designed to push out professional development content over tablets and phones. The content is made by teachers for teachers and disseminated freely through informal teacher networks, social media and the emerging alternate media portals such as YouTube, iTunes, Roku, Apple TV, Chromecast, Blip, LiveStream, Justin TV, Twitch and a host of other media aggregators.

As yet the larger media firms are not publicising it although they have offered encouragement. It is not well known beyond a core group of teachers on Twitter and it won’t have any wider traction unless professional

associations and larger media firms give us some publicity. At the present time I do not see this forthcoming as, I suspect, they are trying to do something similar with their very own lucrative teacher networks surrounding their media empires and content but our business model is about community and supplements theirs – think of us as the cleaner fish for big media companies.

So, we do have the advantage of starting with grass roots involvement and resources and lots of enthusiastic teachers who know the value of open and distributed knowledge. Wenger’s professional communities of practice (1) underpins what we do, not purely commercial concerns, so we have the jump on them – for now. 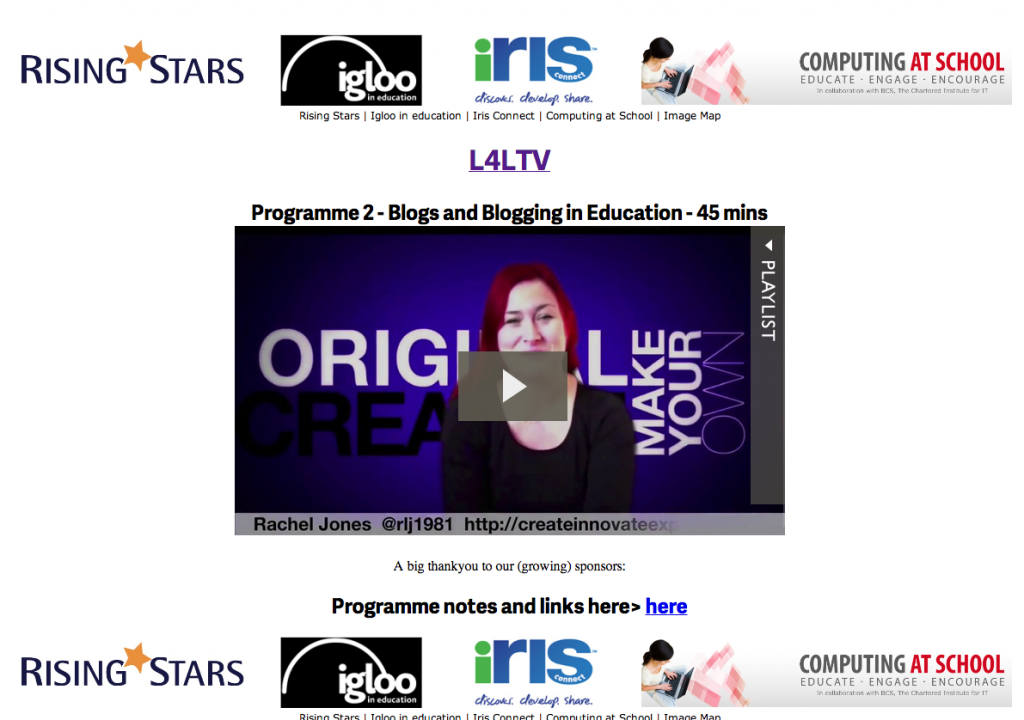 After Teachers’ TV was scrapped in the UK by the current government I co-ordinated a project with a number of dedicated teachers to download and archive the programmes available online. We were able to do so under the licenses current at the time. Many people still have that archive of videos on a hard drive and many schools still use that resource which was downloaded, catalogued and indexed to local drives by a team of about 50 teachers. The incoming government then sold off the rights of the programmes to several commercial firms and the content was saved and put online as a commercial resource by various media and educational companies for free.This, despite the TV Channel being scrapped, was a positive result; however there was one drawback. There was no platform for featuring ongoing practice “by teachers for teachers” and the current “archive” was precisely that – an archive of a time and a place growing older by the minute.

Basically, it was a loss leader for any big TV company to run Teachers’ TV but there was government subsidy and kudos and you were indirectly supporting a small of industry of indie filmmakers who had the knowledge and kit to put out films. The process of making programmes involved the company with the main contract subcontracting out to several independent film makers the task of filming and delivering programmes on various aspects of the then curriculum. Of course that is a top down model that is not very agile and vulnerable to changes as the curriculum, exams, practice and anything you can think of, changes, does that sound familiar? To use media in that way is like trying to offer up food already past its sell by date. Like the Red Queen in Lewis Carroll’s Alice through the Looking Glass – it takes all the running you can do to stay in the same place and you have to run twice as fast to get anywhere! The old media practices, kit, industry were too cumbersome to do this.

A lot of the content for Teachers TV was top down – I wrote the spec for some of the first series of programmes on the use of Social Media. These were then contracted out to smaller media companies who made the films and delivered to a shrink wrapped “standard” model. That was when most schools were doing the same thing in the same way to the same curriculum. How things have changed in the past few years…

Teachers’ TV was always very much a top down venture designed by government to create a free to air TV Channel on Freeview boxes in people’s living rooms in the UK via a set top box.

Teachers’ TV was only aired at set times of the day and it was included on an EPG (Electronic Programming Guide) – it was very niche programming not ever likely to hit the big time in Television viewing so that is why it was also disseminated online. An innovative step you might think but already the viewing habits of “niche” audiences were changing. As well as teaching I was working for an “indie” media company in Soho at the time building classical music and Shakespearian CD resources and I was tasked with putting in a bid to take over the contract of the channel before the decision was made to scrap it.

It was interesting to read the mechanics of how it worked. The main viewership was Teaching Assistants at the time I remember and I also remember how YouTube started to come in and dominate the video viewing habits of younger people in particular.

YouTube made my job redundant and the rise of smart phones, DSLR Cameras, cheaper lighter film equipment and the sudden rise of thousands of “niche” channels on Blip TV and You Tube showing you how to do stuff that film industry insiders had known for years but had not disseminated unlocked a whole cave of delights in the media industry and transformed it over the course of a couple of years – in the “real world” the education on how to do specialist film stuff was being delivered over YouTube – I lapped it up and bought the kit. The music and TV moguls are still reeling and not knowing quite how to cope with the changes. I saw it coming and I thought there must be a better way – so I built my own TV Channel.

I could see, even then, back in the early noughties, how some TV viewing habits were numbered.I could see that people wanted to consume media on personalised devices, mostly as a “second screens”, if they had the money for a secure internet connection. This is indeed what has happened. People want to consume media on the bus, the tube, at work, in the “down” times when travelling. Screens have become all pervasive and attention has become fragmented or highly focused depending on your viewing habits /discipline…

I wondered how one could harness that for good to bring people back together through community involvement. L4LTV was born from that thought over 5 years ago when Twitter and “smart” phones emerged from the miasma of devices coming out into the marketplace. Now it’s iPads and Android tablets – what these have proved to be is another informal platform that breaches (for the better off) the home / school divide and formal / informal learning. Media is distributed on and through them and is so able to be personalised, idiosyncratic and highly focused on targeted niche organisations so you have to think carefully about making media that appeals to professional teachers by reflecting their practice and concerns and you have to make it available freely and easily and what is more you have to give them the skills and access to make it! This is what I am trying to do with the channel – so it is not just a broadcast – it is community training, CPD, events, how to’s and how to make programming yourself at a grass roots level.

To just “broadcast” information is no longer good enough in this fast moving education environment. So the channel has a live streaming “events” remit as well designed to pump prime social networking with and by teachers. To disseminate on a regular basis teacher activity and to reflect on that activity and build community through social channels of activity.

To this end we have launched a “live streaming channel” – we “live stream” teacher activity by going to events and broadcasting like a traditional outside broadcast to the wider teaching community.

I am also working with sponsors to give training to teachers so that they can film “pieces” and practice easily and quickly as the technology to do this becomes easier and easier. I am working with Helen Caldwell at Northampton university to make pop-up screen screen studios where teachers can document their day to day projects and share views and ideas around the media content on Twitter and through the channel or events like TeachMeet etc.

This TV Channel lives or dies by its roots back into the teaching community and what they do day on day – it also acts as a platform for their hopes, desires, concerns aspirations, vision. We aren’t a usual business – sometimes I suspect we aren’t a business at all but an ongoing vision of the process of learning. I guess that is why it is called Learn 4 Life TV.

How to consume or even take part!
We have a live streaming eventschannel here:
http://new.livestream.com/L4L/

This supplements and feeds into the TV Channel. You can see the TV Programme live fortnightly here:

http://new.livestream.com/L4L/L4LTV and then see the archive shortly afterwards here:

We then archive the programming more widely through other channels – so you can also view them on Youtube as an archive here:

or on iTunes here:

We will shortly have a ROKU Channel which will be global and we have plans to expand in 2014 with the help of dedicated sponsors. We align ourselves with sponsors that have a community business model so our first sponsors are Iris Connect, Igloo in Education, Computing at School and Rising Stars.

This doesn’t come cheap and we welcome sponsors and donations to continue what we think is a growing service to the teaching community. Get in touch by emailing me at leon.cych@L4L.co.uk or filling the form in here:

RADIO and AUDIO too…

We also have 3 audio stations

https://soundcloud.com/L4Lnews and a “live streaming” real time radio channel for “24 hour specials” on holidays etc where people can did into the many many interviews I have done over the years.

You can also download an iPhone App of out blog here:

From January we will be running commercial courses in how to make your own media here:

This should help fund our broadcast activities. Get in touch!

How being part of virtual class can motivate your students?