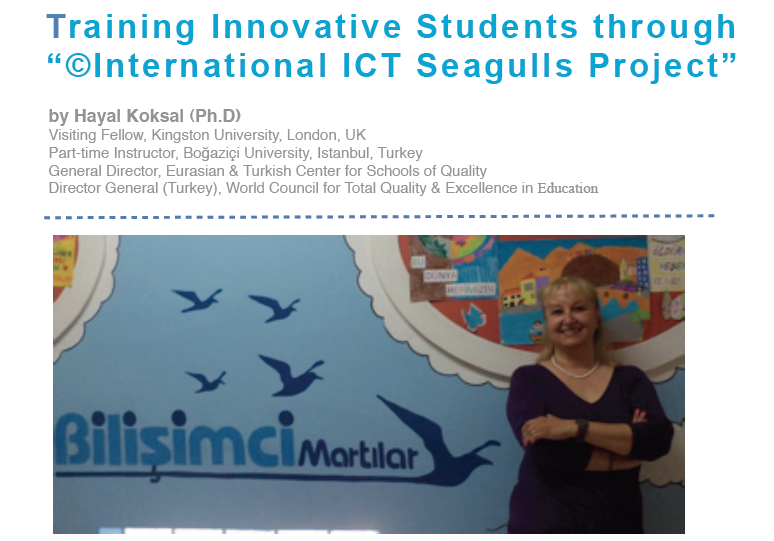 We live in an era of information, technology and communication. Information and Communication Technology (ICT) plays an important role on the training of new generations. The significant role of it lies in the spread of the knowledge produced and/or gained, creative thinking, sharing and collaborating with others.

The author, as the Director of the Eurasia & Turkish Centre for Schools of Quality, has aimed at building bridges among the future leaders of the world through an ICT Project called; “ICT Seagulls in 2003. The goal of the project was determined as to teach collaboration through technology use and thus, to serve humanity in the way of training qualified future citizens (Ennals & Köksal, 2011). It is open to all countries to include all the colours of the humanity into it.  With the project students are expected to internalize the scientific approach in conducting a project and also understanding the  differences between the cultures and the importance of being environmentally literate and emphatic.In other words At every stage of the project, students are motivated to realise the importance of being creative and original, dealing with time effectively, keeping well-designed portfolios and obeying the ethical rules which are considered to be the characteristics of every effective study.In this paper;- the proud year, the tenth year of the ICT Seagulls Project will be shared with the readers.

Main Characteristics of the Project

The Project is called; “© International ICT Seagulls Project” and it has just completed its tenth year which has been accepted as the Proud Year by Dr. Köksal, since it has been a really challenging project for her during those ten years. It is designed for all volunteer teams, which are called İmece / Students’ Quality Circles (SQCs), from Pre-schools to universities within every country of the world. In other words, it includes all age groups from kindergarten to colleges including the gifted and the disabled.

SQC is a team of students who work to solve their problems through a participatory approach. This helps to develop the leadership quality attributes of the members working in the team. Teachers and parents might take part in the supporting bodies. Students actively participating in SQC activities develop a number of leadership traits, skills and habits, such as; self-confidence, self-discipline, interpersonal and public relations, empathy, social responsibility, time management skills, scientific and analytical skills, communication skills, creativity, working habits in a team and broader vision.

In addition to this, the use of ICT affects young children positively, for children are surrounded by ICT in their immediate environments and they are being exposed to very developed technologies from a young age. The essence of the Project focuses on Total Quality Person (TQP) training and aims at “catching kids young”. It is known that early intervention programs and projects help to make children ready for school by supporting their cognitive development and team spirit. It is thought that this readiness for school will have a positive effect on a child’s attendance by facilitating the child’s adaptation to school.

History of the Project:

In 1999, the Ministry of National education started the Total Quality Management in Education (TQE) campaign in 70,000 Turkish schools.  The Turkish Centre for Schools of Quality, which aims at spreading that philosophy and its practices in educational environments, was founded by John Jay Bonstingl and the author on 22nd January, 2000 in Istanbul. The author, as the Director of the Centre decided to design an ICT project to teach the total quality (TQ) philosophy, its tools and methodology to school children and teachers in Turkey in 2002.  The Project would last an academic year, and the outcomes would be shared through the Internet to reach every school in each town and city within the country.  As one significant symbol of Istanbul and Bosphorus is “ the seagull”, the Project was named as “ICT Seagulls Project”. Teamwork would be the main ingredient, focusing on collaboration, sharing and caring rather than developing hostel feelings and rivalry. Since the Project is aimed at teaching the practical side of TQE, it also followed the philosophy of it, i.e. continuous improvement has become the way of improving it.  Each year, participants share their reflections to improve the project and necessary modifications are done based upon them.

A good example of those modifications is about the guidance given to the school teams: During the first years of the Project, a  “face-to-face” model was used and the seminars for teaching “Methodology of the Project management” and “Web page design” were conducted at the conference halls of the schools. However, for the last five years, everything has been shared in the cyber world. Training Folders are sent through e-mails or the training CD is sent through the postal service to each team. If any need appears, schools are visited to give guidance.

Another change was about the inclusion of various groups. For instance, Non-governmental teams were included in 2005, kindergarten teams in 2006, international teams in 2007 and the disabled ones in 2008.

The other change was about the portion of assessment grades. The role of peer-assessing has increased in years. It was 30% during the first years but now it is 60%.

Within nine years, nearly three hundred projects were finalised successfully. In 2003 six, in 2004 five, in 2005 twenty-four, in 2006 thirty one, in 2007 ninety three, in 2008 thirty two, in 2009 nineteen, in 2010 twenty, in 2011 thirteen and in 2012 twenty projects were conducted. In each team, there are 8 students and 2 teachers, in other ways almost 3000 people were trained and affected by the project. They learned how to apply analytical skills whilst managing a project. If it is assumed that their parents and people have also been influenced; it is clearly understood how influential the project it is.

Through the Project; awareness will be created within the student-teacher circles (teams) concerning “human dignity”, “cultural sensitivity” and “tolerance”. Gaining a historical perspective about the studied problem areas (themes), internalizing the team spirit, using quality tools affectively, improving technological and environmental literacy, managing time and managing conflict, focusing on ethics especially respecting the copyrights of others, improving communication and problem-solving skills are supposed to be other benefits. Through the Project, students and the leading teachers understand the necessity of feeding the “Mind-Body and Spirit” in a positive way. Young generations are motivated to be more creative, productive and investigative whatever they study.  Participants develop a positive attitude towards the importance of sharing the results of their projects in a very extraordinary style, by using their imagination to fly towards the beyond of limits just like; “The Seagull Jonathan Livingstone”; not only at national but also at international platforms.

The Project circles study is based upon the PDCA Mindset (Plan-Do-Check-Act) by using quality tools and following the “SQC” logic. They use ICT at an optimal level. It was proved after nine years experience that the Project adds a large amount of knowledge and skills to students through its contribution to character development of the young. They gain and improve the philosophy of life-long learning. It is worth noting that, those outcomes are approved not only at national level but also at the international platforms. For instance; the Project has been supported by the World Country for Total Quality and Excellence in Education which was founded by 25 countries in India. It is heartening to have SQCs from all over the world.

After completion of the registration procedures between the coordinator and the administration of the volunteer school, the needful training seminar is given to the Project Circle (Team) through Power Point sharing and also tele-conferencing sessions in the cyber world with Skype. All the team members and the leading teachers start their project journey after getting the detailed information about the steps of the Project.  Projects must be prepared based upon the PDCA Mindset (Plan, Do, Check, and Act) as mentioned above. Teams take the following steps after getting the necessary training:

Age Groups of the Project:

As it was stated before, the Project is open to all age groups. However, for the assessment step, the grouping is done as follows:

School types do not make any difference in the evaluation phase, i.e., there is no difference between the circles that belong to State or Private Schools. They are assessed within the same group. However; different criteria are used for the young and adult ones. This is also valid for the disabled circles.

Every project circle completing the whole process successfully is a “Winner”.  However, after the assessment period, they are also awarded by various titles, such as: “The Most Creative Circle” or “The Best High School Project Leader”, etc.

There is no financial award of this Project. The ones who complete the project successfully learn how to conduct a scientific project, how to manage time and conflict, how to apply quality tools, the PDCA Mindset, and how to use technology in a collaborative way. The reward is internalizing the methodology and gaining both national and international reputations through press releases, social media and web page announcements from the Project.

The Projects for the Year 2013

This year 10 school teams registered for the project, however, only five of them could finalize their projects: Four teams from Turkey and one team from Nepal. The project teams (SQCs) and their Blog/Web addresses are as follows:

Those teams (SQCs) have just completed the peer-assessment phase and the jury members have been waiting for the assessment forms. The process will be completed at the end of July 2013 and the results will be announced in August. The team leaders will get their awards and certificates on 30th November 2013 at the City Montessori school, Lucknow, India where the WCTQEE was founded.

According to the findings gained through a six-month collaboration with kids and also from the observation during the final presentations, it was understood that “Childhood Education Projects” have an effect not only on cognitive but also affective and psycho-motor development of the children who participated in the project. These findings revealed the importance of involving kids into projects at very early ages. This point must be taken into account, because environmental conditions affect children’s development especially in their early years.  Such kinds of support causes children to start to school more ready, to adapt more easily and be more successful in school as has been stated in many research.  Furthermore, the use of ICT might add more enthusiasm and interest among the kids. By means of providing such kind of diversity to the educational institutions will create an early state of readiness towards cultural differences. This is the essence of a peaceful and collaborative future world.

Submit an article to ICT in Practice Summer 2017 issue