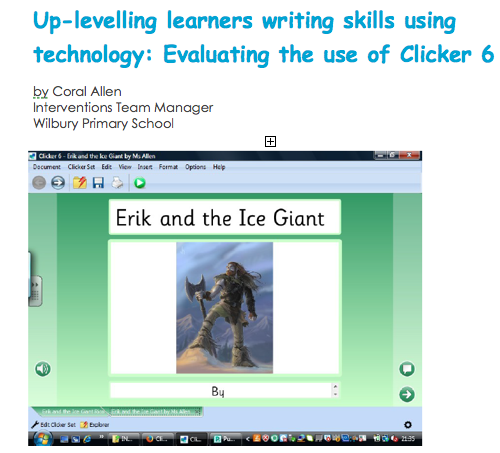 “It was a good way of sharing my book with my class.”

We purchased Clicker 6 from Crick Software at the end of 2012 and I introduced it to the rest of the staff during the INSET day in January 2013, with the support of our ICT Co-ordinator. In the year that we have been using the program at the school staff have mainly been using it when working one to one with children or for working with small groups, but some use has been made of the programme in whole class sessions, especially when introducing new topic vocabulary. I have had experience of using the software both with a lowest level Year 3 group and when preparing whole class resources to be used with both key stages.

The comment above was made by one of the children in my Year 3 group. He had excellent ideas verbally, but had a lot of difficulty when organising his ideas on paper. Due to his level of English language acquisition and rigid use of phonics he made a significant number of errors and this made him a reluctant writer. 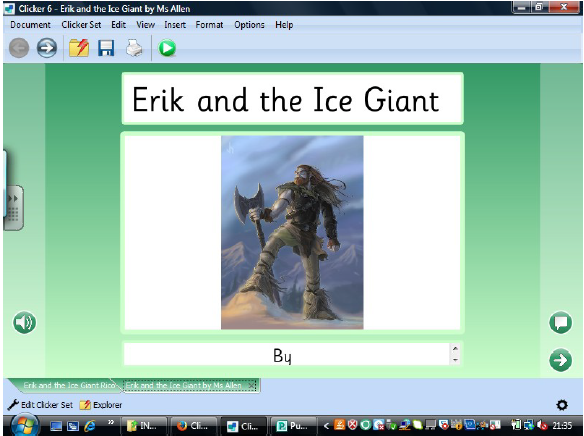 His stories often jumped from one episode to another with no clear sequence of events and this meant that he would need to go through a number of edits in order to get a cohesive piece of writing. Like many emergent, low level writers he was reluctant to edit his work and so many of his stories remained in an unfinished state and he had never completed a piece of work that he felt confident enough about to share with the rest of his class.

Using one of Clicker 6’s excellent Wizards (Make a Book) I was able to provide the group with a word and picture bank to help them to structure their work and to support their use of the vocabulary that they would need to use. Clicker 6 includes a predictor for the next word in the sentence and has the facility to read the child’s work back to them. This meant that they were easily able to spot their mistakes, often before they had been made. The children felt confident when using the program as their work could be edited easily and the format of writing a book meant that they could write the main events of the story onto each page and then work on one page at a time, rather than having to work on whole story in detail from the beginning. The more able members of their classes were writing chapter stories and so they felt that their pages reflected their class mates’ chapters. Even those children in the group who had never had the confidence to write independently before were willing to try, using the supports that the program offers and with very little support from me.

Here are some of the comments that the children made about their experience of using Clicker 6:

“It was easier to go back and correct my mistakes.”

“It was easier to change things I needed to change.”

” I felt excited because you get to type. If you write it takes longer than typing because you can put in whole words.”

“It was good when I showed my book to my class.”

Their teachers were equally impressed with the results:

A pupil in my class, who is not a confident writer, was given the opportunity to use Clicker6 to support him in Literacy. Whenever he came back into class he was always excited and wanted to share his experience with his peers. When I asked him if he enjoyed using Clicker6, he said “Yeah, I like if, it helps me write things when I get ideas in my head.”

On one occasion he was able to use the program to read out a Viking adventure, that he had created, to the whole class. He was very competent when using the tools on the program and was extremely proud to show off his hard work to the class. It gave him a real sense of achievement when the other children reacted so positively and were so impressed by his writing.

Overall, since using Clicker6, he has become more confident in any writing activity given and has shown a marked improvement, including in his willingness to write more extended pieces of work.

This is a great program to aid pupils at various levels both with their reading and writing. Those who found the latter laborious and time consuming, including those with English as an additional language, were encouraged to write.

The big plus in using this program is its ability to read back and highlight the words which they have written. Having immediate feedback aids their learning but also gives the teacher the opportunity for assessment.

As one pupil said,

“It helps you to find your mistakes and correct them. It also gives you ideas when you get stuck because a word bank appears at the bottom.”

Those who used this program really enjoyed it.

The experience that I had with this group of pupils and the effect that working with the program had on them was by no means an isolated event, as these comments from other members of staff show:

Once the initial difficulty of teaching the children how to use Clicker6, whilst only having basic knowledge of the program myself, was overcome it has proved to be an ideal tool for aiding independent writing in SEN children.

Using Clicker6 with a group of the lowest achieving year 3 children meant that quite.a few of the early sessions focused on the secretarial aspects of the program. However once the children understood how to use Clicker6 they quickly became more willing and enthusiastic to write independently. This was especially apparent in the boys in the group. Often they would not want to leave at the end of a session because they had not finished their work.

Being able to have their text read back to them, meant the children could hear spelling mistakes or omissions in their writing. This was also good for pointing out grammatical errors especially as all the children in the group were EAL and had difficulty in hearing mistakes in their spoken language. In later sessions children became more accurate at spelling words that they had routinely misspelt before, constantly hearing a word and seeing how it was spelt definitely helped their spelling. This has helped the children in this group to become more motivated and confident in their own writing ability. They can now use the program efficiently.

I have recently been introduced to Clicker6 and have been exploring its potential with children who are new to English.

Martin has recently arrived at Wilbury into year 3 and not only is he new to English but he is learning to read and write for the first time. I have used the sentence building element of the program to support him to say and construct simple sentences. As part of our unit of work on animals Martin used the program to compose simple sentences about a chosen animal eg A zebra has stripes. A zebra has four legs. etc. This activity gave him an understanding of word order in English and also an awareness of simple punctuation.

Martin was really engaged and felt a sense of achievement at being able to compose a simple text. The visual model on each page was also very useful and enabled Martin to work independently.

I have also used the program to create simple matching activities which have allowed children to practise new vocabulary and self-check their own answers.

Our ICT co-ordinator has provided some informal Inset on the program and has shown me the extensive free resources that are available, which I will explore further and add to our scheme of work, where appropriate.

I have only just started my own learning journey with Clicker6 but can already see the potential, invaluable support it can offer to EAL learned at an early stage of acquiring English.

Another of the templates that has been used in both Key Stage 1 and 2 is Matching. This can be used to match pictures, sounds or words and you can either use those provided or import them from an external source. It has been used in the school to support the introduction of topic vocabulary and works well as an interactive whiteboard activity.

I have only been able to touch on a few of the features of the program and how it can be used to support SEN and EAL pupils in this article, but I feel that one additional feature should be included here.

The program includes access to a wealth of free resources, 1190 to date, and these are regularly updated. They cover a wide range of subjects, not all seen here, and many come at different levels of difficulty. This means that most teachers would be hard pressed to say that they can not make use of the program in some way.

Our next step will be to train more staff to use the resources available and to give them the confidence to create their own.

Can you teach mathematics through digital games, apps and websites?

Games Based Learning – Making it Happen by Paul Ladley